At this time of year, I'm often asked about myself and my work by students working on their upcoming art thesis or project. I'd like to take the opportunity here, to answer some of the questions that arise...

·  Please, introduce yourself and explain what you do... 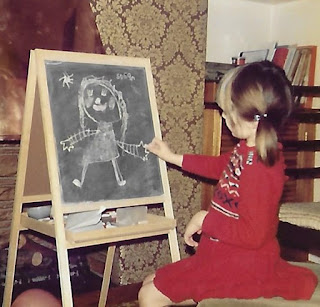 I was born in in 1975 in a small semi-detached house. My mother was a trained nurse, my father worked as a gas technician. As a child, I spent a lot of time playing on my own, in my own make-believe World.
I played in the woods near to my home, and believed the trees, that I gave names to, would protect me. I made dens in trees, with made-up curtains and carpets from things that I found around home. I never felt like I fitted in at school, I felt like an outsider looking in, except I loved going to English lessons, where I was in my element writing stories, and letting my imagination run free.
I enjoyed doing art at school, but I didn’t like the way it was taught, it was too didactic.
I floated out of school, not really knowing what to do next.
By chance, I happened upon a mixed media textiles course run at the local college, and after being accepted onto the course, I found it was something I really enjoyed, and began to feel passionate about. The course suited me, and my personality.
I went on to study Textiles at  Bradford College, where I gained a 1st Class BA Hons, and then a year later, went on to study for an MA in Mixed-Media Textiles at the Royal College of Art in London.
Since leaving the RCA, I worked for 3 years as an artist-in-residence in schools around Scotland.
I started to get my own work seen in some Shows in London, and as my work began to get more well-known, I was travelling to London frequently for meetings with clients, so I decided to move back to London where I lived and worked for 10 years.

·         For how long have you been working with your paper technique? How did it first start?
I started this technique after graduating from the RCA in 2003. It started after a trip to ,
where I bought a beautiful second-hand book on the . My father had passed away
when I'd just started studying at the RCA, and I was thinking about life, death, and the 'in-between'.
My first book-sculpture was ‘The Quiet American’. I cut moths from the book with a craft-knife. The piece was inspired by a Chinese legend a friend told me about, about two lovers whose souls re-emerge from burnt ashes in the shape of two Moths. One of the reasons I began working with paper as a medium was because of its connection to spiritual rituals that I encountered in South East Asia, and this in turn has led me to work with paper in books, and fairy tales. 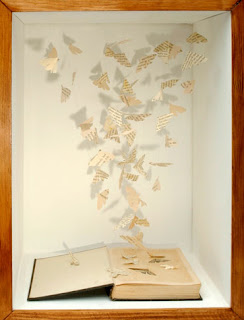 ·         Although yours is such a personal work, whose has inspired or influenced you?
Artist’s who have influenced me are Ann Hamilton, Annette Messenger, Joseph Cornell  and Jonathan Callan. Jonathan Callan’s 2003 Show titled 'Inteferance' at The New Art Gallery in Walsall was especially influential.
I’m also inspired by 19th Century Illustrators such as Arthur Rackham and Alice B. Woodward. 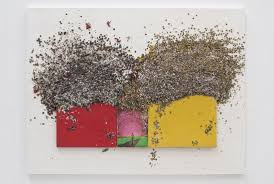 ·         Whose work, besides influences, do you fully admire?
I love everything Kiki Smith does, also, Christian Boltanski. Mariele Nuedeker, Andrea Deszo
and Paula Rego. I like that these artists work in such a varied way, with a menagerie of materials.

·     What makes the difference in-between your personal work and those works
that are commissioned? What remains the same in the process?
I see it as two different things. In commissioned work, I'm often following somebody else’s brief.
I find making my personal work more challenging, but in a different way to the challenge I face when working on commissions. When I'm working to my own brief; sometimes that is more difficult, as I feel that I'm putting 'myself' out there, and so there is more at stake.

·         What are your hobbies and interests? Are they somehow visible though your work?
I love reading, walking (particularly in woodland in spring), I enjoy nature, bird-watching, and I like visiting museums, art-galleries, theatre, ballet and film.

·   How do you feel the official world of art has accepted or taken into account your work?
I feel my work sits on the precipitous edge of art and craft,
and that it crosses over many disciplines.
My work has been embraced by design, illustration, fashion, textiles and craft,
but I do feel I feel a little secluded from the art world in the UK.
I find the art scene overseas in countries such as Japan and Russia are more accepting of my work.

·  Your work is quite delicate and full of detail, about how long does it take you to prepare one piece?
I always read the book first, at least once or twice, and then I begin to make the work, cutting out,
adding details. The detail is what brings it all together, the magic element.
It is a tediously slow, sometimes frustratingly slow process, one small book-sculpture
can take approx: 4 - 6 weeks to complete.

·    Do you preview the whole scenario you’re about to create or somehow go with the material flow?
I have a rough idea in my head, which I sometimes sketch down on paper,
but I definitely let the materials lead me while I'm making.

What do you do for the material preservation of your work?
How do collectors or conservateurs regularly store it and keep it?
I sometimes treat the paper to protect it from UV damage, but also one of the reasons I began
housing the book-sculptures inside wooden and glass boxes was to protect them.
·
What are the differences in-between your paper and your fabric work?
I treat the materials the same, but  paper is much more malleable to the hand, it has a visible memory.
I find fabric is less forgiving than paper.
I'm not tired of working with paper, in fact the more I work with it, the more fascinating it gets. 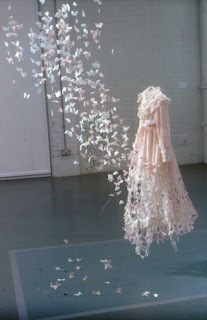 ·   In some interview you pointed you wanted to develop large scale work, how is that going?
I tend to correlate smaller elements to create larger scale work. I feel that by just enlarging the scale, some of the intimacy of my work is lost.

·  What are your next projects and activities?
I'm currently working on a public commission for Chatsworth House in Derbyshire,
which will be revealed later on in the year.
Posted by Su at 09:55 No comments: Links to this post